Last weekend, I was at Global Game Jam 2015 up at the Uni. Thus far, this is my 7th(?) game jam, and second game jam as staff. This was also my first year where I was mostly in a solo team. My regular collaborators were not present and I didn’t make too much of an effort to join or enlist others to join my team. Later on, a student whose team had dropped out while he was at work joined in and created some cool looking ships (previously just triangles).

The theme for GGJ15 was “What do we do now?”. A broad theme which to me could easily be contextualised as “Here is a choice: choose” which is basically the essence of gameplay. Alternatively there is emphasising words (What do WE do now, What do we do NOW, etc.), but by the time I heard it, I had already come up with a concept based on the diversifiers. The game I created is called VAST (GGJ link) and it is a space dogfighting game. Originally pitched as a space exploration game, the player controls a ship in procedurally generated space (e.g. asteroids, planets, pirates, etc). The player could then choose to play by fighting, robbing, or exploring areas of interest. However, being a timed event, I only basically got the fighting part done. But, the key ‘gimmick’ of the game was the use of the ‘Stephen Hawking’ diversifier: control is only via one key. Each ship is controlled with but a single key. Hold the key to fire left or right thruster alternatively, or tap to move forward. Simple! I also used the ‘Drop In’ diversifier which allows anyone to join in (by pressing a key).

You can play VAST right here in your browser! Most keys are available. Hold to turn, tap to go forward. Every key press changes the direction of turning. Shooting is automatic. 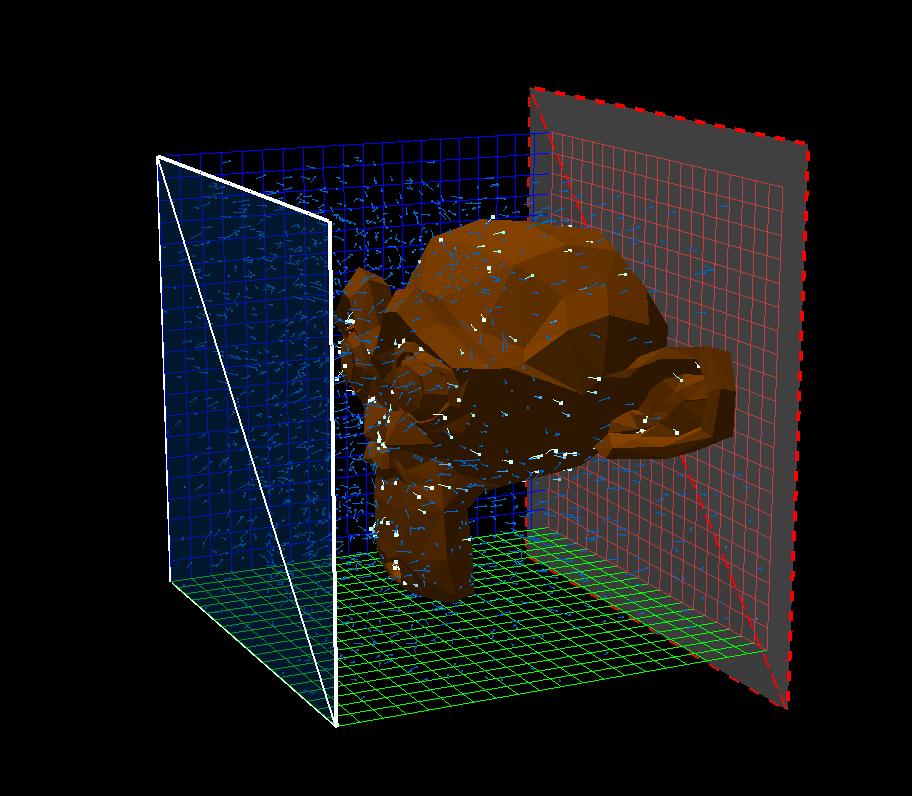 Back in 2008, I was an undergrad working a bunch of other undergrads on a COMP314 (Software Engineering Project). The project actually turned out pretty good (then again, most of them do).

I was recently asked by a colleague who remembered the project if I still have the source code for it. I was smart enough to keep it around (though I think it’s CVS’ed somewhere out there) and fired it back up. The results still impress me, so I’m chucking it up here on my Featured Work.

The project was to extend an existing 2D Wind Tunnel simulator. But the difference between 2D and 3D was too big for a direct extension, so we opted to ‘roll our own.’ The resulting Wind Tunnel application is a 3D, real-time simulator which fires wind ‘particles’ at objects and simulates the effect of the wind on it.

The physics of the wind particles is built upon layered octrees, where each particle is evaluated at each timestep and will attempt to escape heavily populated tree nodes to emptier nodes. In theory, this causes the wind to continue to move from the emitter.

I’ve uploaded a zip of it to Sourceforge, along with a brief wiki explaining it. In theory, the in application ‘help’ should work, but it wasn’t for me.

The simulation is quite visually appealing and would make a neat screensaver.